Benoît exhibits in the lobby of the Windsor Hotel, focusing on one medium: Fire. He proposes to some members of the PALAM collective, to which he belongs, to invest the garden. Photographs, sculptures and paintings, all built and executed in a natural environment, as an attempt to tame again this phenomenon as dangerous as fascinating.

And the participation of :

This performative ritual took place during the supermoon of March 8, 2020, a few days before the first confinement, come and see the result at the Windsor Hotel on May 29th at 2pm.

Expression of a carnal emotion: 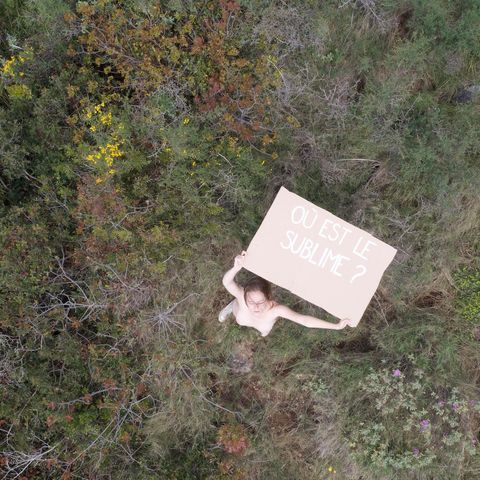 Aimée Fleury, Where is the sublime, 2020

Aimée Fleury was born in Paris in 1998. Having received a rigorous education at a single-sex Jesuit school, she took her first steps at the Pavillon Bosio, the art and design school in Monaco.

Always more tormented by a repressive, regressive, violent, paternalistic, moralizing, egocentric, expansionist and neurotic society, Aimée builds a sanctuary, a Rilkean solitude between her and the others, comparable to a no man’s land. She launches, like javelins, increasingly paradoxical works in this space of doubts, conflicts and judgments.

It is in the face of this sad observation that the artist begins to approach a more atmospheric, conceptual and societal work. Seeking an aesthetic of gentleness to convey calls for help, his raw material is none other than the sensitive substance of the individuals around him. His protocol always seems to start from a sampling of the disturbing agent. The resulting work is too “literary” to show the tales of the Anthropocene. Living since always in the paradoxes of his time, the desolation which results from it makes matter to the sublimation. As disarmed as you are in the face of the images she conjures up, the artist has chosen to laugh rather than cry about them.

Gathering in a two-engine psycho, making a retreat/escape to nature and heightened activism seemed the least futile move in light of the world around him. With her impostor complex holding her back, Aimée slowly became a kind of myth by her absence.

The personal state of consciousness or unconsciousness of the artist Aimée Fleury having been lacking lately, we do not promise her return in an imminent way.

If he gave the impression that his departure was definitive, then we will keep you informed before his rating rises exponentially.

Where is the sublime?

Where is the sublime? is an attempt to redefine the idea, an opening towards the contemplation of a world that we destroy. It is a quest for reunion with the inner instinct that we have learned to dominate, to stifle. This concept links of course with the idea of the immanent goddess of the Eco-feminist movement. The sublime, part of each of us, links us to an eco-system that exceeds us, immerses us in the empathy of the living. The work is part of the global artistic practice of the artist Aimée Fleury. Its Eco-manifestos have already taken the form of individual demonstrations in kind to defend the concept of Auto-muse and the pursuit of the sublime during the first containment of 2020. Using the drone to make photographic traces of past actions, the approach is here, while assimilating to the movement of the glue girls, to make reappear a militant art in the institutionalized contemporary sphere, to give its aesthetic value to the feminist and environmentalist struggle.

+More info on the room 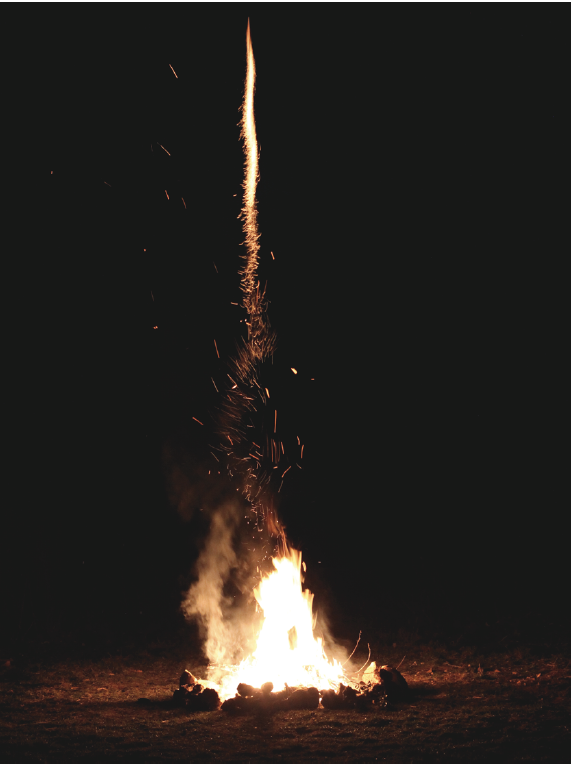 The fire within the fire

A mental image, a realized sensation.

this is an archive of a moment that does not exist 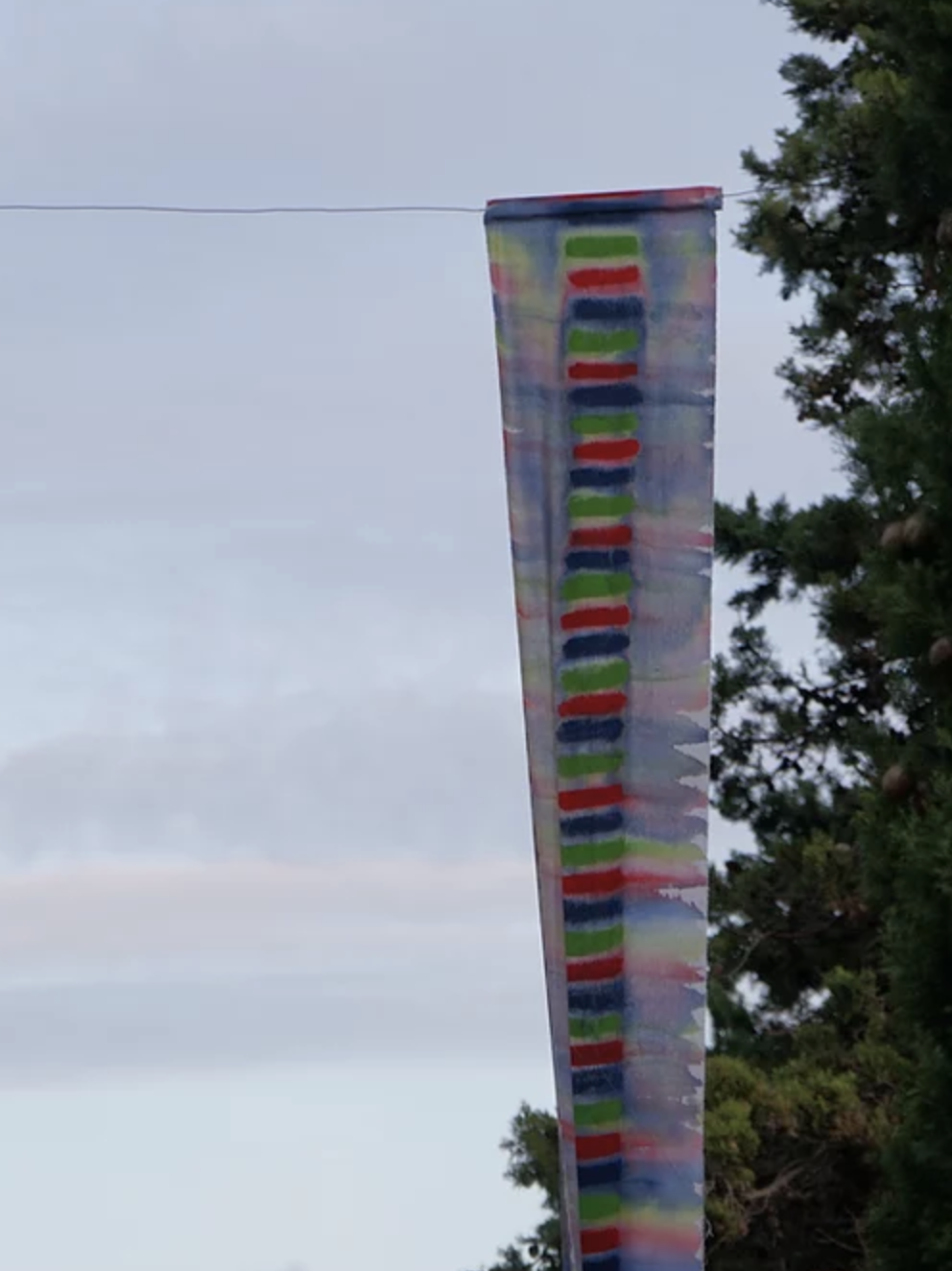 LIGHT COLUMN
Cotton/dye/water fabric, 2020, 5 m x 0.3 m.
To hang this spine between heaven and earth on a tree is to constitute the primary colors of additive synthesis. These primary colors of light in contact with water creates random small rainbows on the edges. A game between the colors of the light and the emotions that it contacts in us. Suspended vertically, it moves with the wind, according to the elements.
Website: https: //www.mona-barbagli.com/
https://instagram.com/monabarbagli

A graduate of the Beaux Arts de Nantes, Mona Barbagli deals with the question of sensitive interactions specific to humans.
She links each emotion felt to a color to describe them and uses different mediums such as video performance, fabric and wax to capture them. 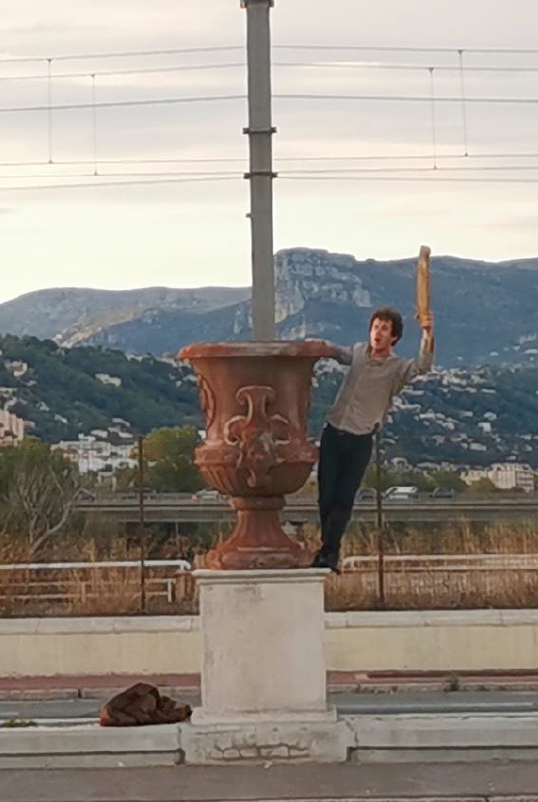 The initials of the word “fire” observed under a poetic microscope, to reveal its minimal composition. But the substance is unstable, we must be playful, and drift with it to the point of incandescence of the language, transcribed here in three barks from the storm Alex.

The praise of love took in its hybrid dance, where heat and uncertainty follow one another, until only the passionate smoke remains, and its highly volatile character.

Tristan Blumel, born in 1989 in Haute-Savoie, France, lives and works in Nice, France. Engaged in creation that goes from the play on paper to the oral performance, he works unceasingly so that poetry has a wider presence in the contemporary space. His first collection “Le Lampadaire et la Baignoire” is published by Abordo. He is a member of the Nice-based art collective PALAM, whose creative focus is on hiking in nature, as well as of the current poetry collective La Dernière Vague, the socio-poetic reportage collective La Trace Des Pas, and the coordinator of the association DEL’ART.

Presence in the world, hybris, liters of second, words.

in P.E.T., landscapes in waterspouts.