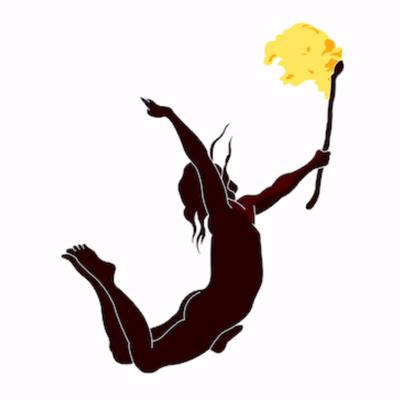 Taking up an emblematic image of my practice, “Light in love” aims to play its role as a “logo”, a digital landmark initiating my entry into the blockchain. 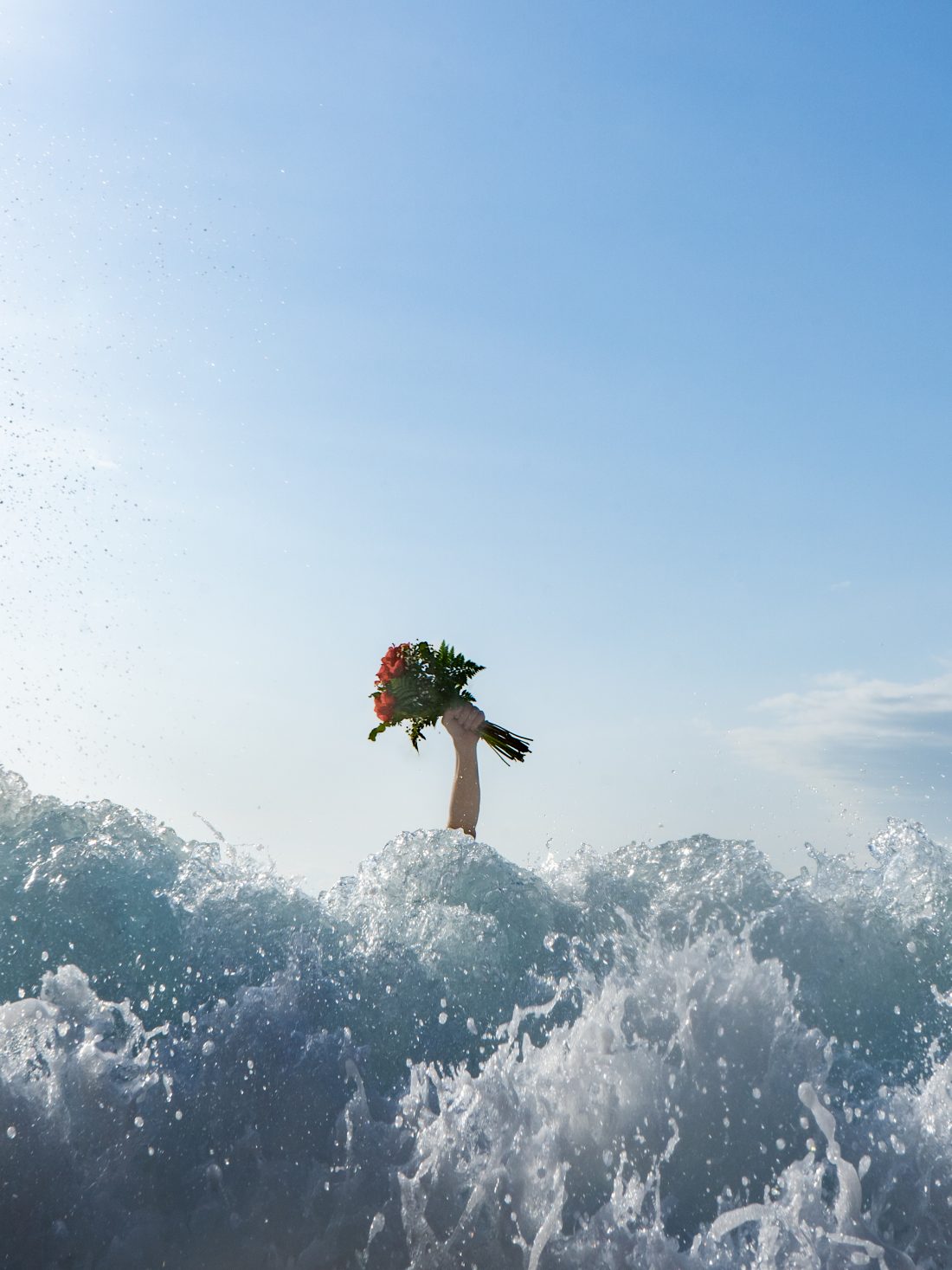 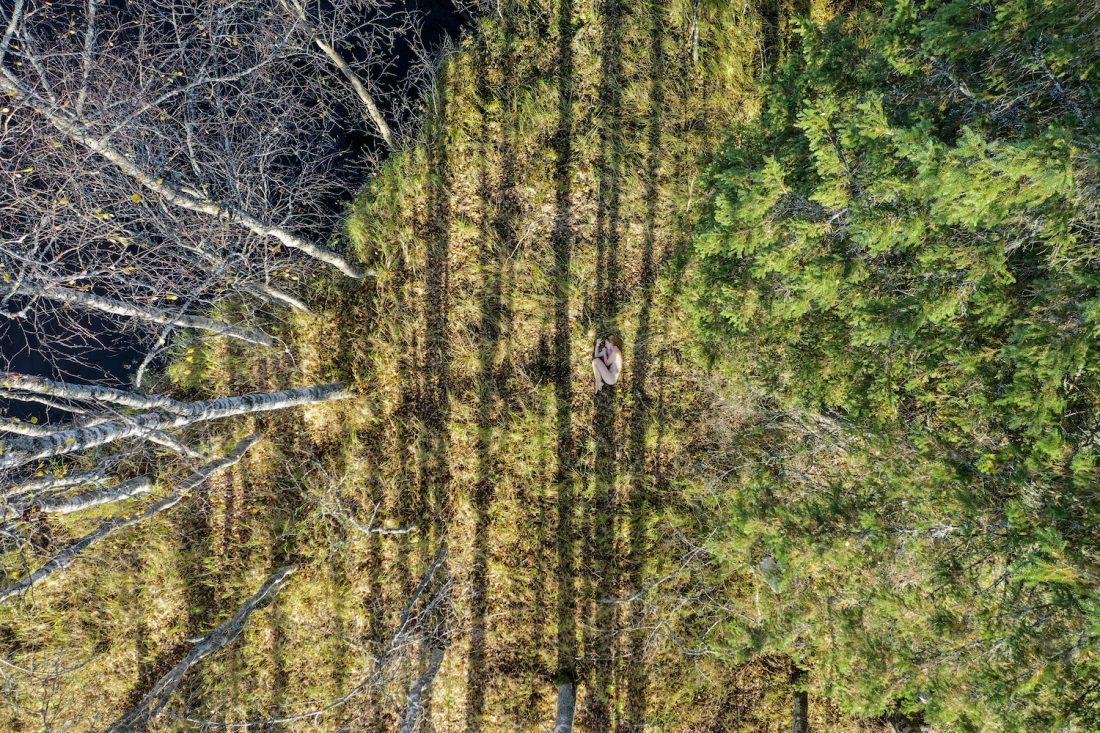 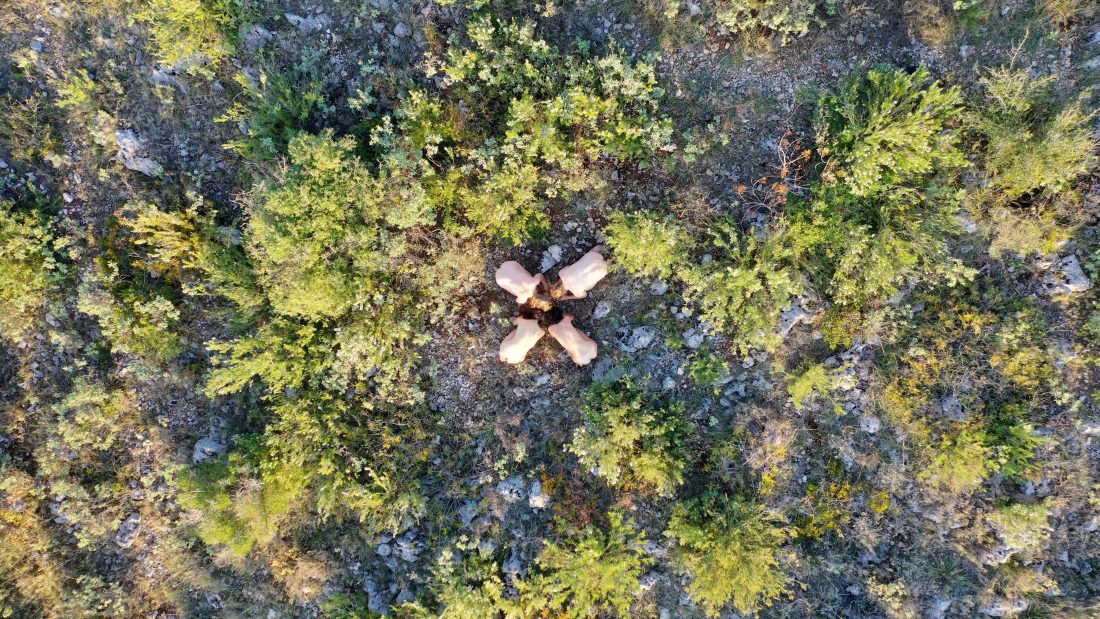 Geometry From the Sky

Geometry From the Sky #2

Lunch on the grass,

Geometry From the Sky #1 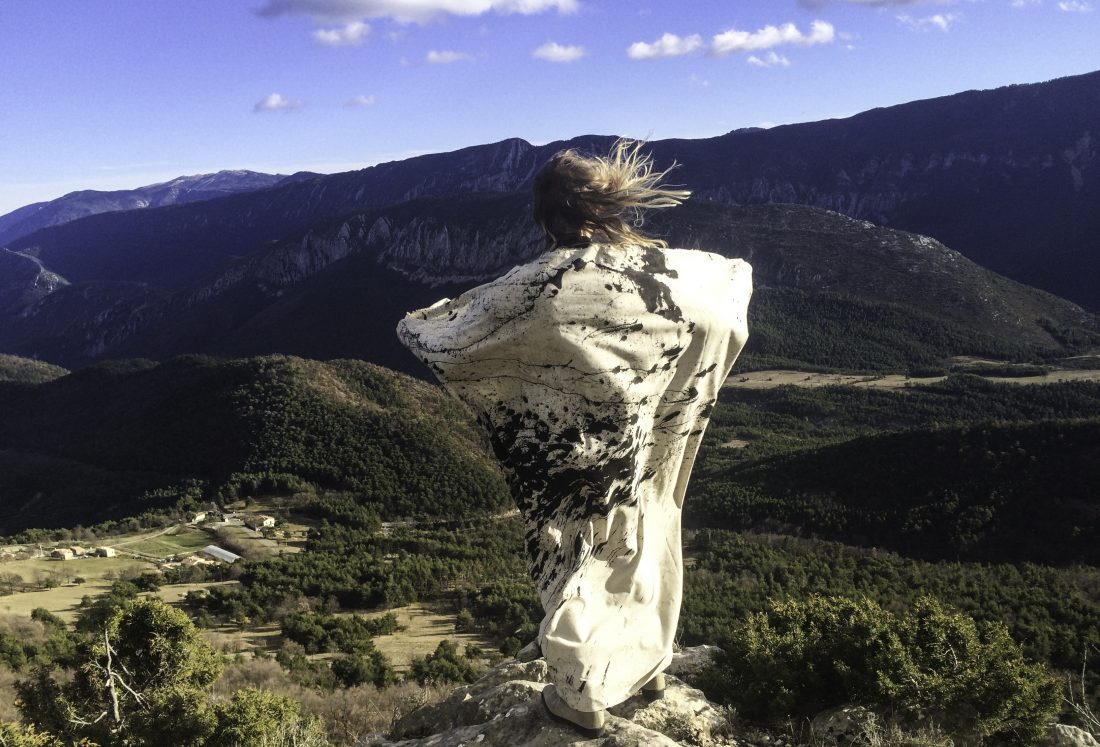 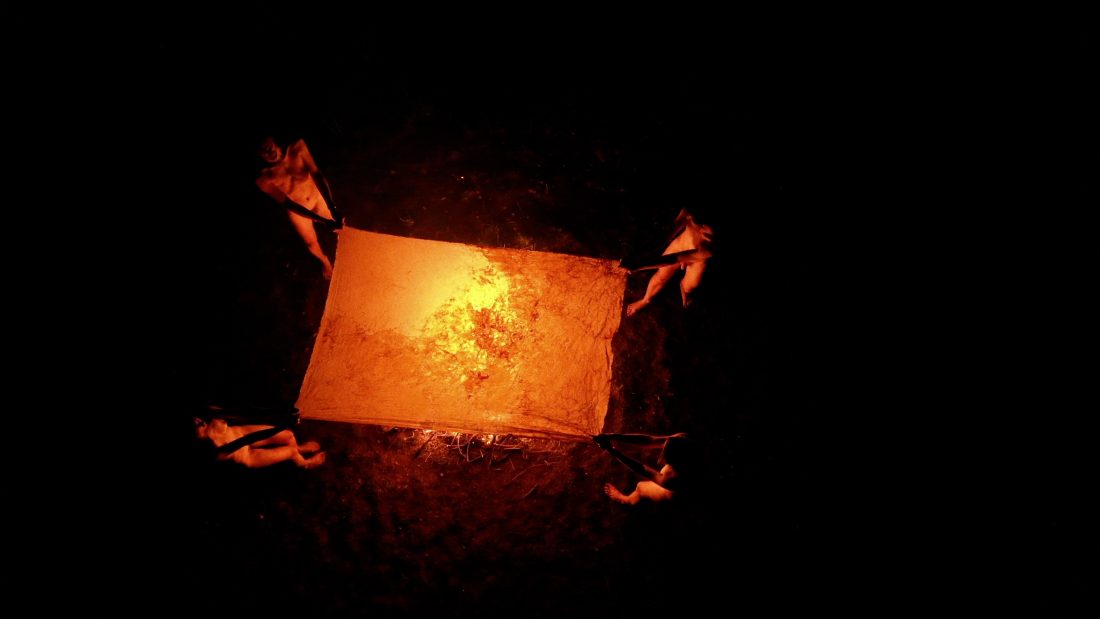 The time of the fire

“Accord” is a performative dance whose sound comes from the combination of two types of sensors. The first are micro-contacts which react to the activity of the gestures produced. The second types of sensors record brain activity, transform the signals into digital information, and modulate the sound produced by the sensors placed on the body.

The whole produces an improvised dance, where the device, by producing a sort of teardrop effect, gradually takes control of the performer. 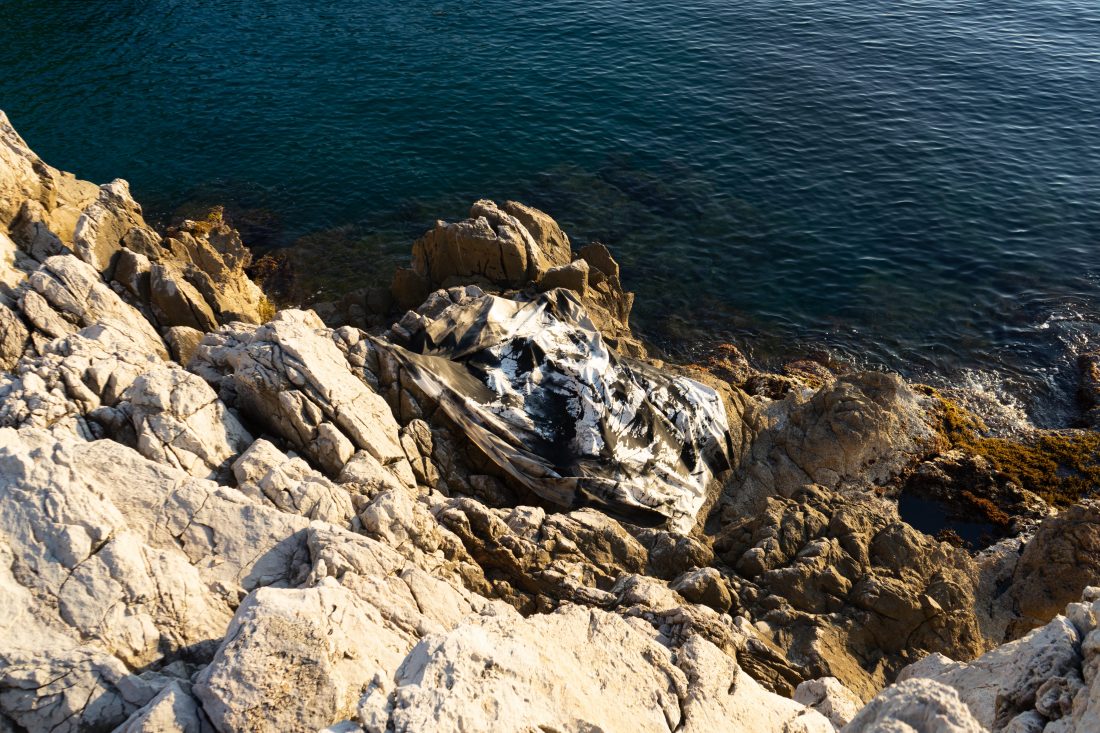 An inkjet of a cliff onto a canvas below.

mountain its vertigo and its fall, its geological time and its limitless space .

The realization of the canvas is as quick as the fall of about ten meters that put a few drops of coal mixed with water.

Before being a work, Ecotopia is many walks, alone or with friends through the mountains. Nights spent inhabiting nature, under the stars, warmed by a campfire.

Cliffs climbed for hours, so that once at the top for only a few seconds , a jet of ink covers a canvas below.

Apart from the linen canvas itself, the materials that compose it come from walking, the ink is created the day after nights spent outside, with the crushed ashes of the wood fire, to which is added a sap serving as a binder.

The fertile mountain gives birth to the substrate which is deposited on the canvas, the wood which grows on it becomes charcoal, then ink. 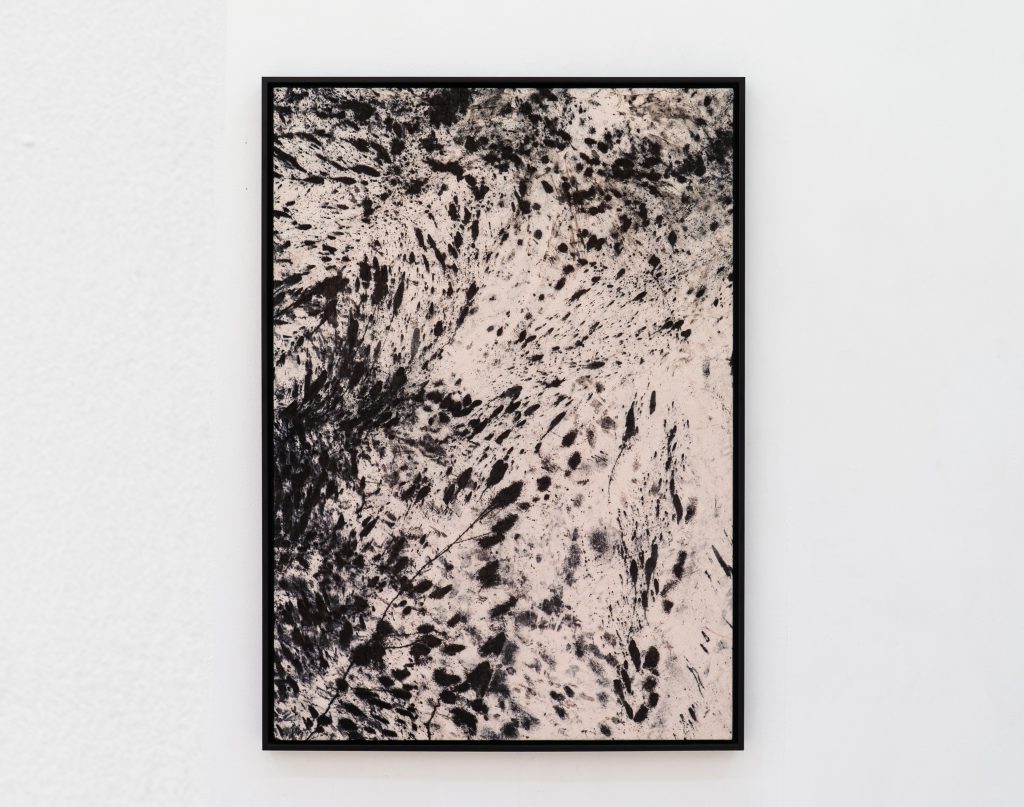 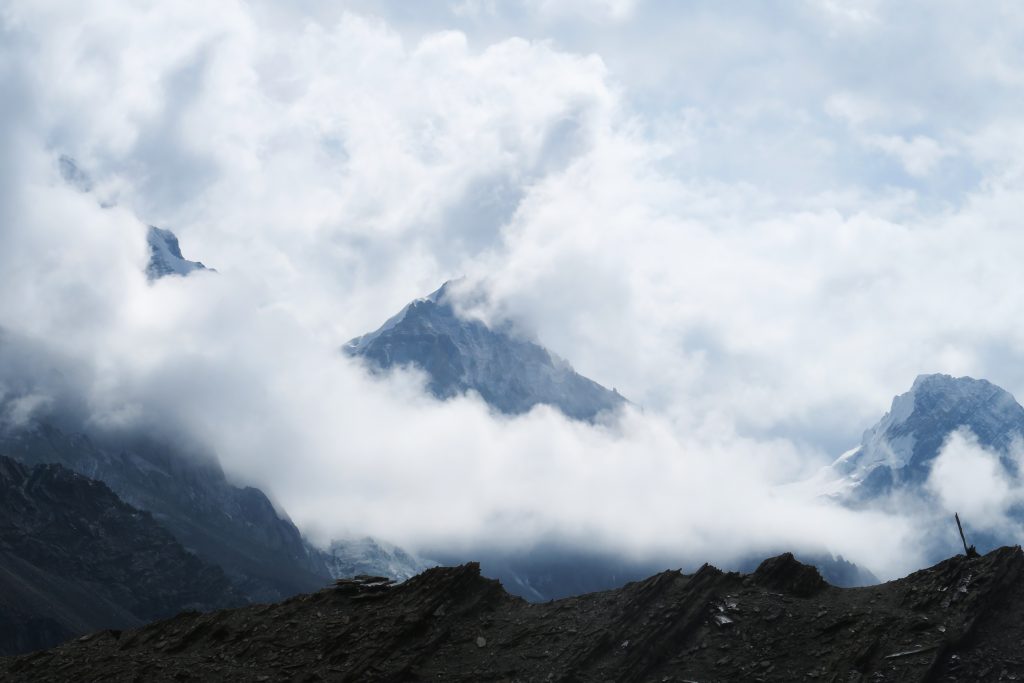 The first Ecotopia walk and not the least, took place in 2016 in Nepal, during a solitary walk around the Annapurna range, the second massif of the Himalayas.

After several days of preparation in the city of Phokara, I finally found the necessary elements to create the canvas at the top of Thorong Pass : The linen cloth itself, a mortar, a sieve to crush the coal and of course the equipment necessary for a trek in the high mountains.

15 days of walking in the heart of the mountains, the canvases in the bag, the evening heated by a wood fire, the next morning we crushed * (you speak of a solitary walk but here you speak in the plural) the coal to make the ink.

A thousand cliffs, waterfalls, encounters took place during this walk, this fact (?) will be counted in another book.

On the tenth day, I arrived at the basecamps from the Thorong pass, at 4500m. 1000 meters me still separated from the pass at 5500m, the day was to be 8 hours of walking, with about 50% oxygen , each step was a test and an enjoyment at the same time.

To add difficulty to this trying walk, this funny idea of climbing the highest point (?) that I found to throw this coal mixed with a little water.

The group of friends that I joined for two or three days could n’t wait for me, afraid of arriving during the night, or of being blocked at the top.

I had already been carrying this canvas and jars of powdered charcoal with me for 10 days, I couldn’t give up here.

Slightly above the High camp around 5000m, after already 2 long hours of walking, I saw a cliff which overhung the whole valley.

The canvas deposited under the cliff, I climb this big rock as best I can. A few snowflakes beginnt to fall, the first since the start of the trek, is the mountain trying to speak ?

Annapurna is for the Nepalese the residence of Shiva. It has often pleased me to to think that these canvases captured some fragments of Shiva herself.

Balanced in the void, alone for miles around, not without difficulty I managed to throw this ink.

There is often in my feelings an “all that for that”. Here is an inkblot that I will haves been able to do in my living room 10,000 kilometers from here.

I am a simple pretext, the sherpa of the mountain, who brought her her canvas and her ink so that she could draw herself, tell us all about it through her drawing.

I delicately fold the canvases, and continue the trip under the snow.

*Frequently on the way I met travelers, who made the same ascent as me, that morning I was with Léa 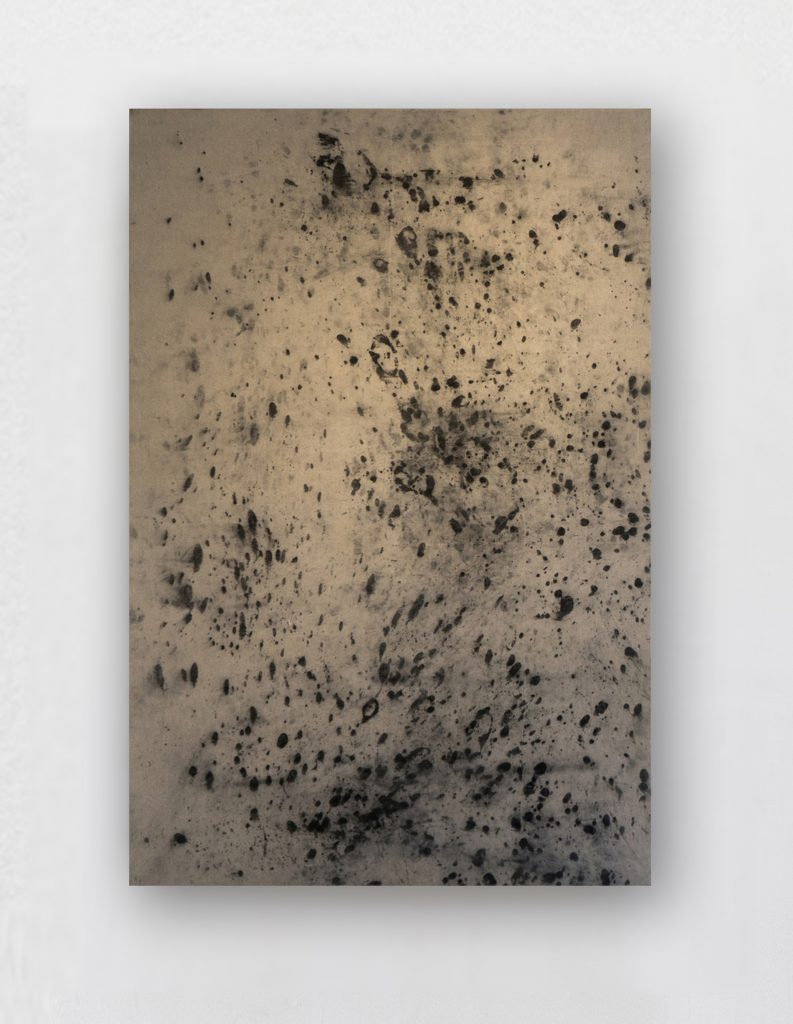 Ecotopia continued in France through mountain climbing in the Mercantour massif and in the no less perilous southern pre- Alps .

Vision of the sublime in Kant, the mountain exceeds the capacity of the human mind to think it, to represent it. This is how the artist’s gesture disappears to let its formal singularities express themselves.

In a meditative Zen momentum, it recalls the approach of calligraphers who seek in their gesture the feeling of emptiness.

Performative conquest of a summit, the paintings of Ecotopia become a strong synthesis between walking in nature, climbing cliffs and the mountain itself.

There are many places among these mountains that I name Ateliers, not to consider them as places where the artist masters the process of producing his works, but much more as places where the mountain works, works day after day. Myself I just passer , return, y live a few days.

Again “I” am a pretext, a tool that nature uses as it sees fit to produce its works. 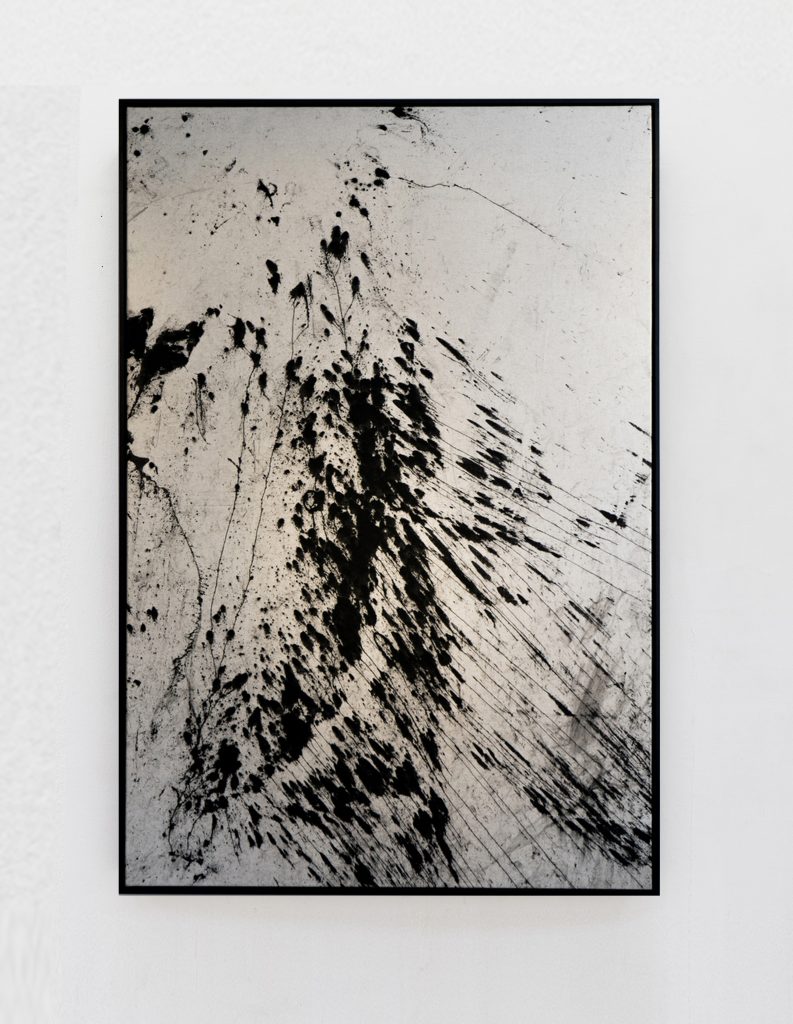 At the end of the mountains, the sea, in 2019 Ecotopia always seeks to make nature speak for itself, and continues to explore the rocky shores, the edge between land and sea. With a gesture similar to that of the mountain, a jet of ink from a vertical point on a canvas placed on the bank flows and takes its imprint.

The sea in turn , which comes to the rhythm of the waves, participates in the design of the shore, covers it, dilutes it, sometimes violently, the canvas becomes this collaboration between land and sea.

In each canvas, all that remains of the artist is his walking body, penetrated by the surrounding nature. The canvas is in a way its withdrawal, its disappearance. These choices seem important, this or that mountain, such and such shores, but they are nothing. It is the mountain, the shore and the sea that draw, the artists withdraw from the outpost of their works, not participating, just like the viewer, only in that they recognize themselves in nature.

Pareidolia, coincidence, the first of these canvases inexorably let appear the drawing of a wave. 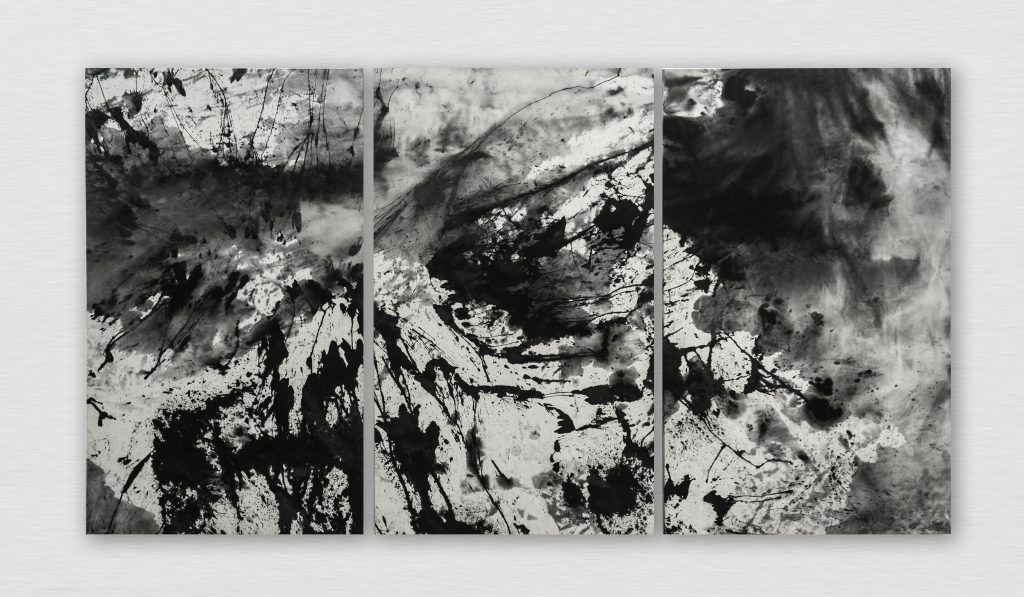 If the technique can precisely make one think of dripping, throwing ink on a canvas, it differs, even opposes as to what the work captures.

While the drippings capture the energy of the author, his dynamism, his presence, Ecotopia is more of a withdrawal, to leave room for the environment. If traces of gesture appear, they are only residual.

Modern art has brought to its climax the advent of the individual, his own qualities, his difference, his ego. Even the Land Art of the 70s is no exception, the man in nature, the man who sculpts nature.

The individual is what we try to go beyond, and our strategy is nature. What Ecotopia does is to consider the body acting no longer as an individual having these singularitiess and mode of expression s proper s , but as part of a whole, the bodies are in a natural environment , they become an integral part of it.

The second challenge of this going beyond is the collective, ecology without the collective stumbles. This is what Ecotopia is turning to, and what it will try to build now. 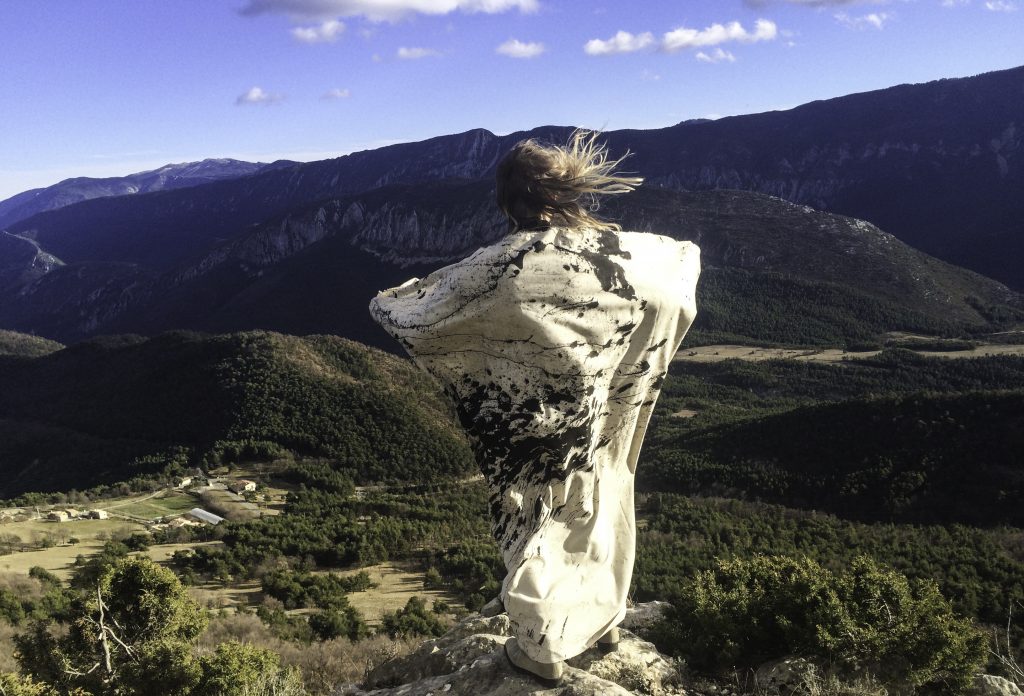 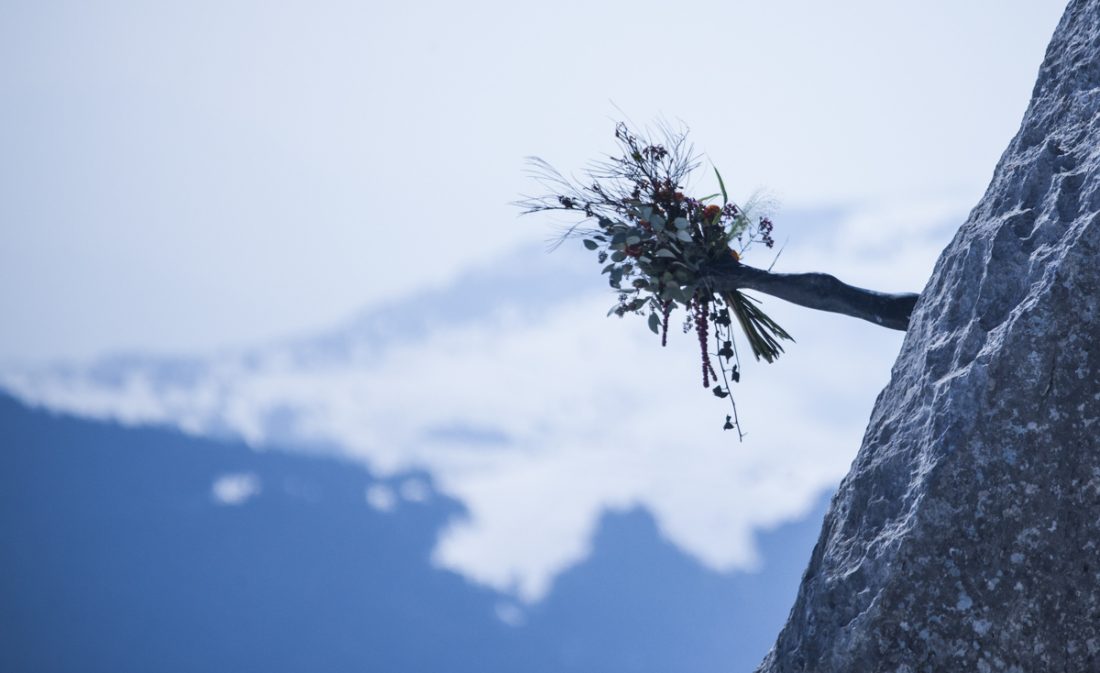 Ici la terre is a love epic imbued with romantic references, resounding like an ode to nature and life. It is a collective and multidisciplinary expedition that brings together six friends to seal the bronze sculpture of an arm holding out a real bouquet of flowers to the top of a cliff.

Conquest of the mountains, of vertigo, as well as a conquest of love, Ici la terre magnetizes the references of culture in order to orient them towards nature. A militant gesture that is unaware of itself, out of the common field of vision, with a deficient energy, economic balance (all that for that…), by espousing the philosophy of copyleft (this sculpture and its future no longer belong to us), working by above all to give glory to life!

Here is the video of the expedition which fixed the arm in the mountain, and placed a bouquet of flowers on it:

Like a performative metaphor of the project immortalized in a photo, jumped into the sea with flowers, holding out a bouquet of flowers for a few seconds in the sky. 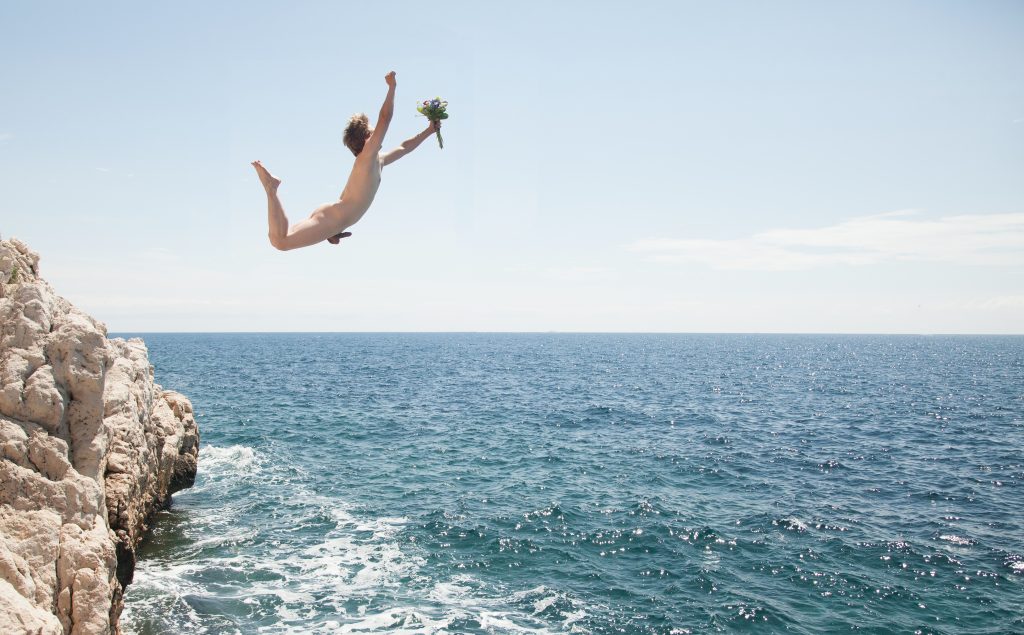 Expression of a loving emotion

Flowers growing from the body. Like an indescribable emotion by the words that come through the skin. Recomposing the face giving it the tint of a floral expression. 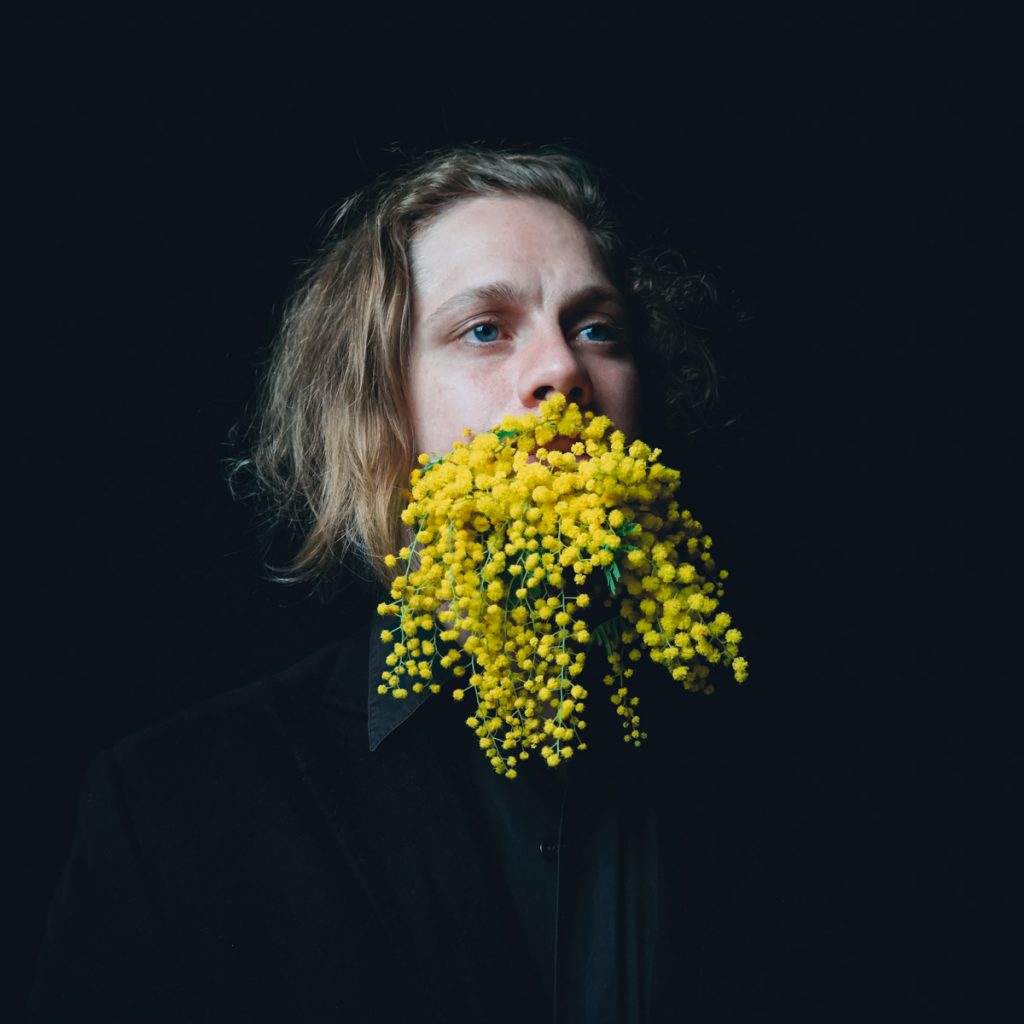 The expeditions that made us choose the mountain to carry out the project ” here the earth ” also made us immortalize it during a photo for each place visited which immortalizes this search. 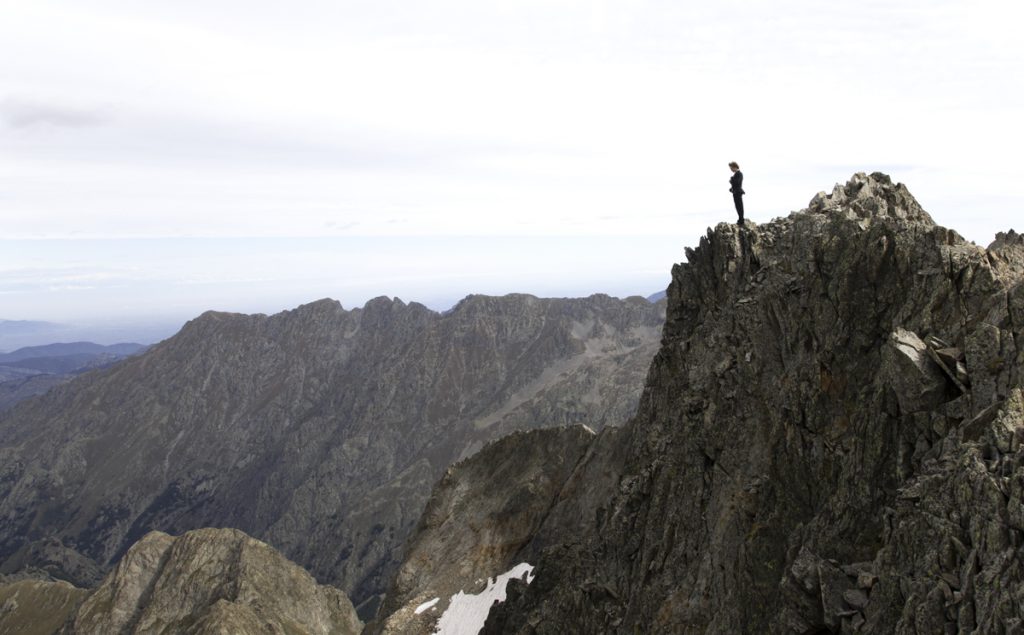