Benoît’s experiments hybridise with stealth. They bring different media (painting, sculpture, photography, video, sound, publishing) into the performative field. Being multiple, they take their sources without affiliating themselves to the interventionist or appropriationist approaches of the second half of the 20th century before escaping into the off-field, tracing an undetectable dynamic, in appearance only. Choosing art as a pretext for life, “fantasising the ultimate piece as a simple breath : a respiration”, Benoît is part of a Fluxus heritage where life is no longer theatricalised. Here, the poetry of the ordinary is grafted onto a hymn to nature, free of any bucolic vision. However, Benoît does not intervene in the natural environment like the Land Art artists, he does not modify the landscape, nor does he preserve or heal the ecosystems. Benoît’s casual attitude to art history might seem undermining. Far from being a thrust of creation, the artistic quotations that sometimes surface are apprehended in a carefree manner, in copyleft mode, a loose development or diversion. Worlds away from the postmodern artist multiplying references, Benoît turns his gestures into poetic images stripped of their historical grounds; a reactive position toward a contemporary art scene rooting for the here and now. As Marcel Duchamp put it “L’inconsistance n’est pas l’insignifiance”.On the Annapurna mountain range, in the Mercantour Massif or on the shores of the Mediterranean, Benoît walks, camps, climbs, swims, and snorkels to create gestures that look like conquests, yet remain futile and ephemeral. He teases and woos nature, throws himself into the void or into the depths of the abyss to offer, for a moment, a bouquet of flowers to the Earth [Les Tentatives, 2014]. 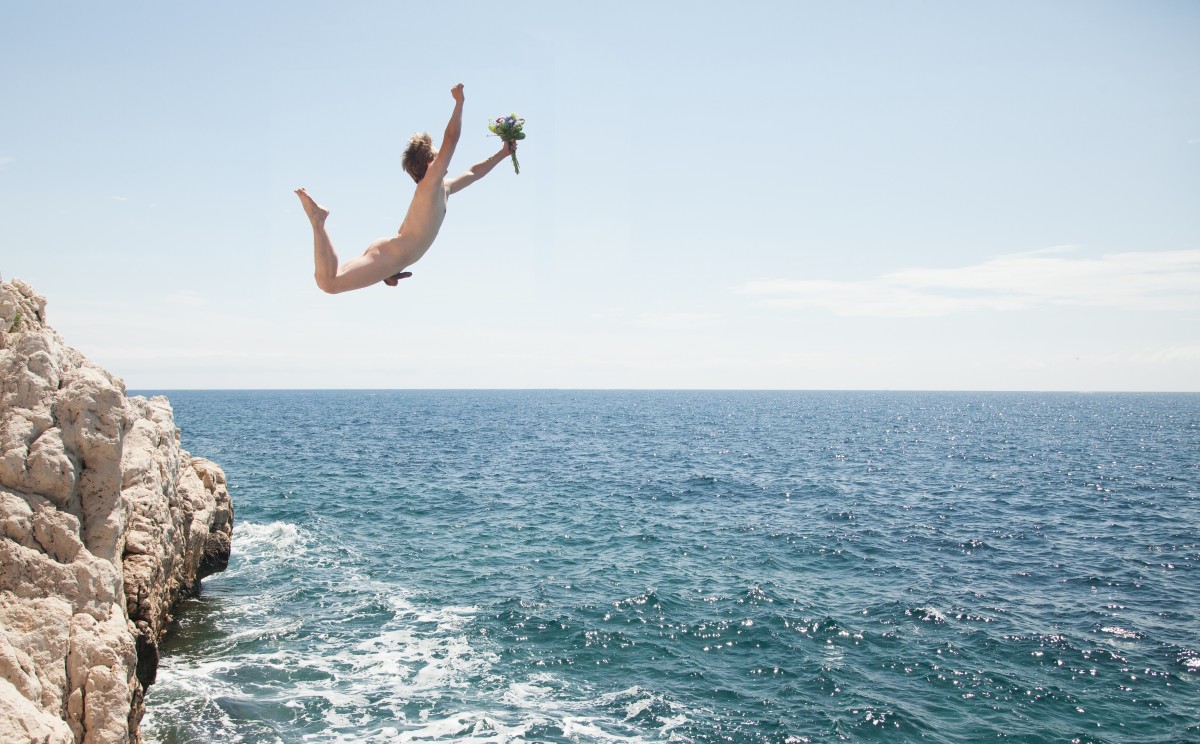 The ascent, the vertigo, the attraction of the void, the bewilderedness of the depths enlace the pressures with a sexual impulse. The primordial energies – water, fire, air, earth -, the elementary qualities – hot, cold, dry, wet – are summoned along unalike nocturnal or diurnal landscapes – the mountain and the sea, the cliffs and the softness of the lakes, the heat of the sun and the icy whiteness of the snow. The “nude in the landscape” theme appears as a necessary counter-field in the anthropocene era. It no longer evinces the central and narcissistic place of the human or of the “I”, it solicits a horizontal and pacified relationship with the world. It is built on a desire to act, to react, to take charge. The erotic offerings explore the ties connecting humans to nature. A plea for ecosophy, an invitation to feel the vital impulses unfold. Meditation is established as a Forme de Paix [2016]. Les visites [2014] elate the pleasure of connection and interaction. Nature is no longer an idealised place of retreat, it is a privileged and intimate ally. It finds itself where the wind rises. Benoît fosters moments of artistic synergy through eco-solidary actions. Thus, he initiates collective creation sessions in a joyous and high-spirited atmosphere where the figure of the author and of authority is questioned. Together, they let themselves fall as if in a deep sleep [Nous avons essayé de nous endormir sous l’eau, 2018], play the trumpet in the middle of the sea [Il y a comme un lien entre la musique, l’eau et la vie, 2019], run naked in the snow [Coup de soleil, 2019]. 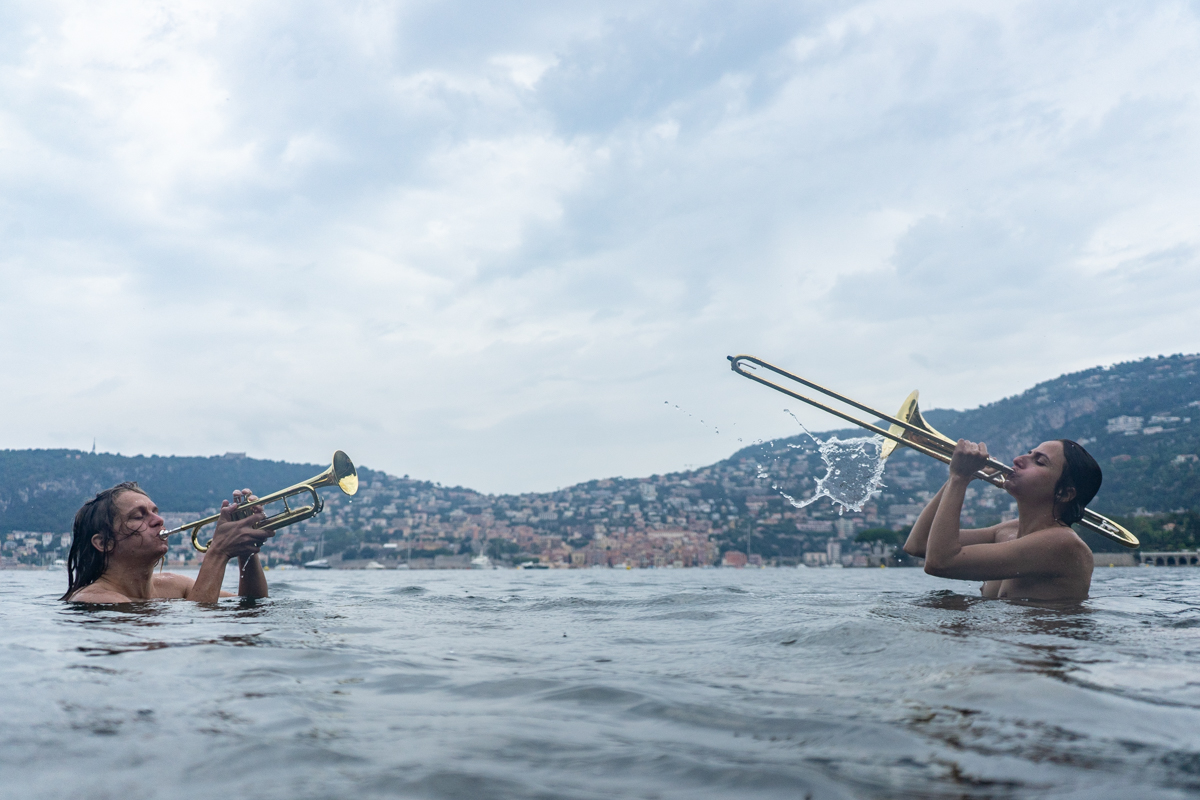 Il y a comme un lien entre la musique, l’eau et la vie, 2019 Some landscape expeditions are permanent, some are ephemeral or nomadic, requiring the help of companions with specific skills. With a naval architect [Marc Risé], musicians and amateur free divers, he immerses a piano, “infusing a musical wave into the depths of the sea” [La marée de la trépidation, 2015]. 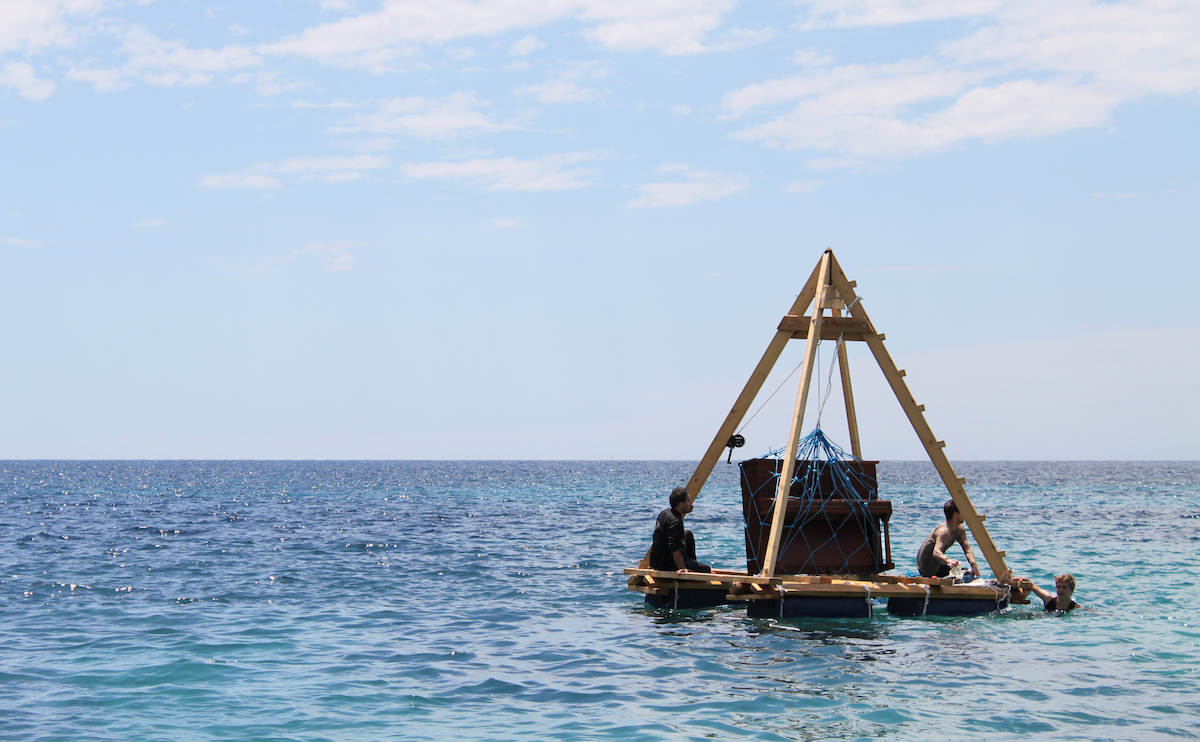 Accompanied by climbers [Félix Bourgeau, Audrie Galzi, Tom Barbagli], he fixes a bronze cast (weighing about 20 kg) of his arm holding a real bouquet of flowers doomed to disappear if unreplaced [Ici la terre, 2014]. With a camerawoman friend, he takes a burnt wooden stele into the wilderness as an interstitial doorway to the other side of the mirror [Monoxyle, 2019]. Nature is also a privileged partner. In Athens, with the artist Eri Dimitriadi, he tries to capture the shape of water on land or beneath the sea [Ocean mémoria, 2017- ]. Alone, he throws natural ink made on site into the landscape to smear a canvas placed below in a form of cosmological co-creation [Ecotopia, 2016-2020]. This proclivity to work in collaboration crystallises at the creation in 2018 of a collective of variable identity (Tom Barbagli, Evan Bourgeau, Camille Franch-Guerra, Omar Rodriguez Sanmartin, Anne-Laure Wuillai) and with a fluctuating name (Azimuth, Palam) binding common eco-solidarity aspirations and ideals. The collective and the mountain hikes become a work procedure, a way of inhabiting the land [Azimuth, 2018; Sous la glace, l’eau, 2019]. Benoît is one nomadic spirit, trying to open up an exploratory field where energies circulate freely until the ties between experience, pleasure and creation become inextricable. His manifesto or epic texts and his editions [Ici la terre, 2015] bear witness to this. The expeditions unabashedly take on a flight of lyricism. This reminiscence of Romanticism, far from being naïve, seems to evoke what the past can say to the present so that humans evolve not in spite nature, but with it. In this sensual activism, the enjoyment of freedom never ceases to exult over and over again until it creates a political and societal driving force. Collective – not community – commitment takes the form of a cortège. 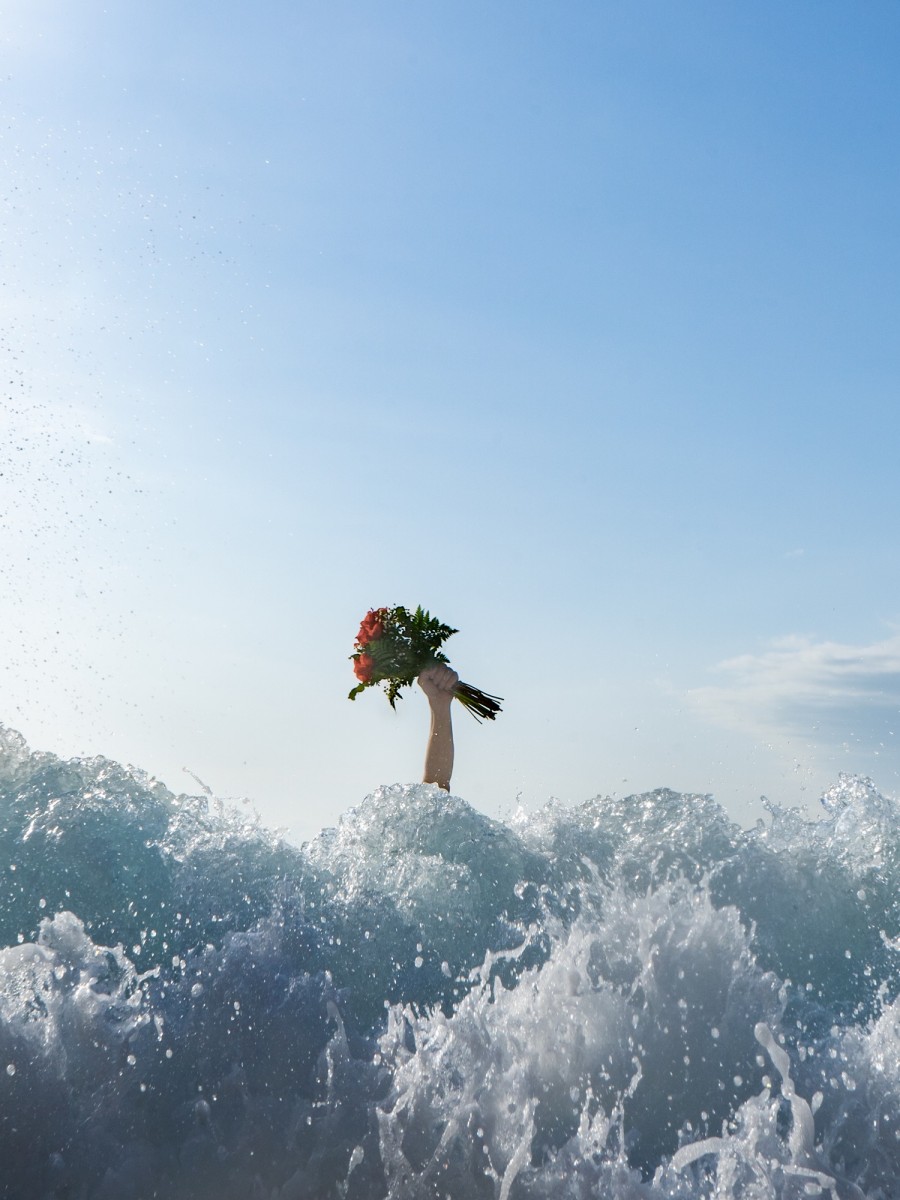 They raise the fist armed with a bouquet [Natural Revolution, 2019-2020], love each other at night in the streets of the Exarchia district – a place of self-management and citizen initiative in Athens [ACAB, 2017]. With fellow artist Aimée Fleury, they feed and cultivate the fire of freedom [La libération, 2020] in a kind of processual and shamanic ritual reminiscent of his plastic research on telepathy, synesthesia and trance [À corps, 2013] or his work under LSD [Déploiement de l’eau, 2011]. 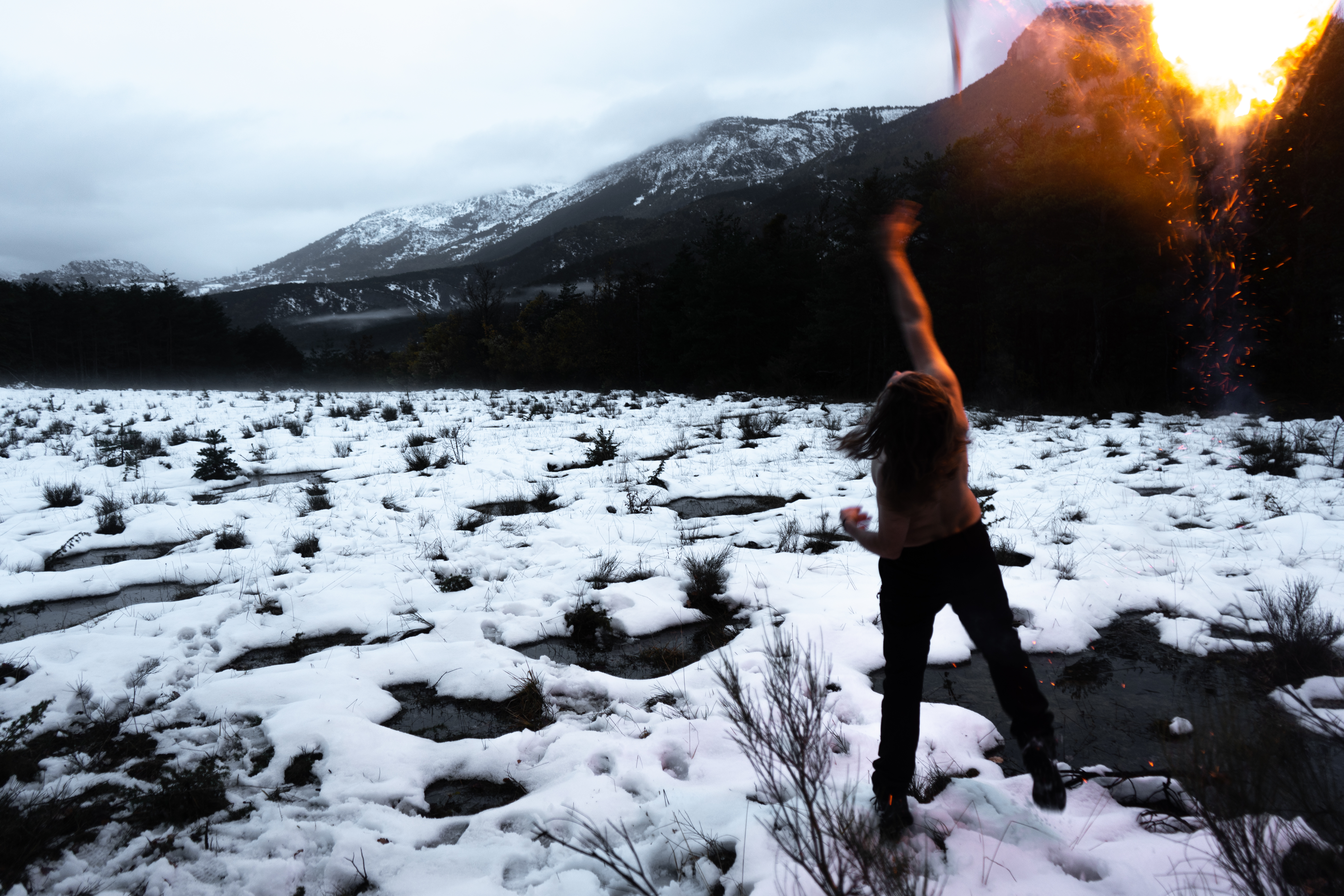 These works of art, moments in time committed to a better tomorrow, are not always part of an eco-responsible reflection, more in line with the practice. Meanwhile, their nature is elsewhere, immaterial, elusive. They emerge from the emotions they enable, from the call to freedom, from the storm and momentum they instil. 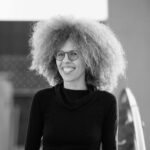 An engineer in conceptual technology, is elaborating a network of thought transmission at a distance without any intermediary interface. A technology acting as a lubricant on the words and things, between gestures and emotions, to soften them and connect them. To reach it he uses love and life.

A technology sometimes oral, sometimes plastic, that never stops building bridges between various knowledge that reveal themselves through encounters and the collective. Each project generates the stimulation of different trades: mountaineers, engineers, architects, sailors…

The artist does not know, he learns, he exchanges and becomes the mirror of his encounters. The transdisciplinarity makes the strength of its projects. It dismantles the already porous partitions of art to turn it into an object without sides, not established, intended to create connection.

He fluctuates between a project of communication and large scale broadcasting (Art – Business – Contemporary Marketing 3.0) and an intense love story told with sincerity and commitment. He staggers between holding a rigorous logician discourse, structured and an intellectual imposture where we cannot really tell when the diversion it operates started. Dressed up by complex devices and sometimes tenuous references, the meaning of the gesture is expressed in a simple, popular language, always sincere.

Bucolic, in love, loving life, and giving it thanks, diving frankly in the middle of it, declaring art a pretext to life.

And believe it or not, in this bubbling activity, praising slowness, stammering the decrease as the only possible environmental window. This slowed activity always turn to meditation, like a means to access oneself, like a societal means of demand, fantasizing on the ultimate work as a simple breath: an inspiration.